November 17, 2014
In 2009, Al Gore followed up with the publication of Our Choice: A Plan to Solve the Climate Crisis, a book that "gathers in one place all of the most effective solutions that are available now and that, together, will solve this crisis". "It is now abundantly clear that we have at our fingertips all of the tools we need to solve the climate crisis. The only missing ingredient is collective will." 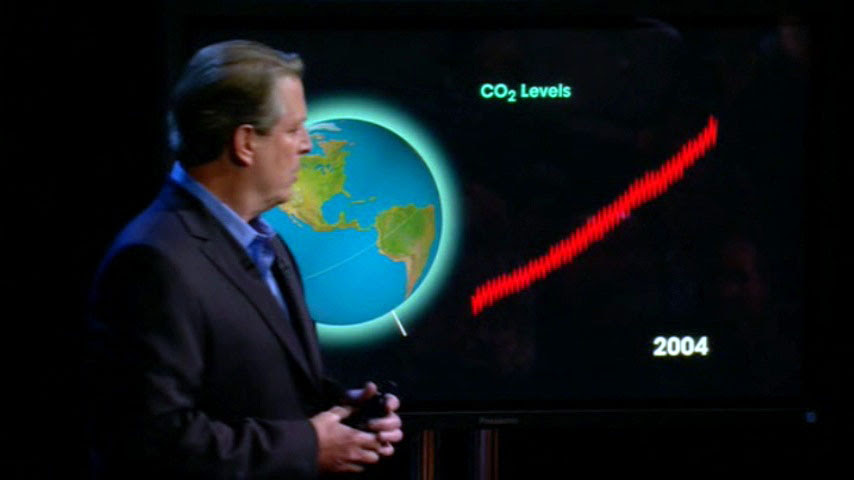 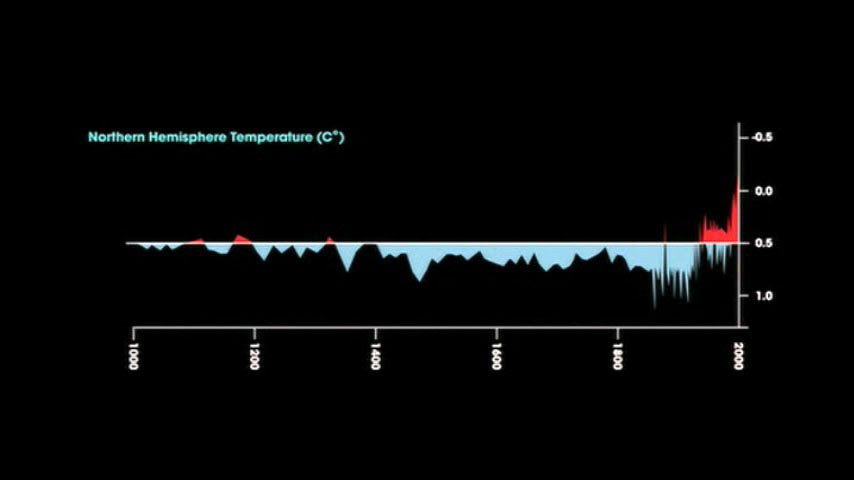 00:20:19
One thousand years of temperature history obtained from isotope analysis of ice cores. 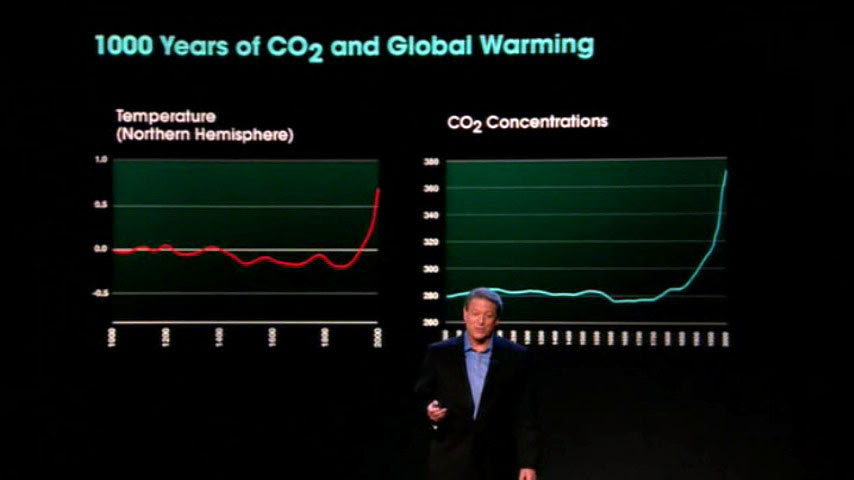 00:20:53
One thousand years of CO2 and temperature data -- the curves have similar shape. 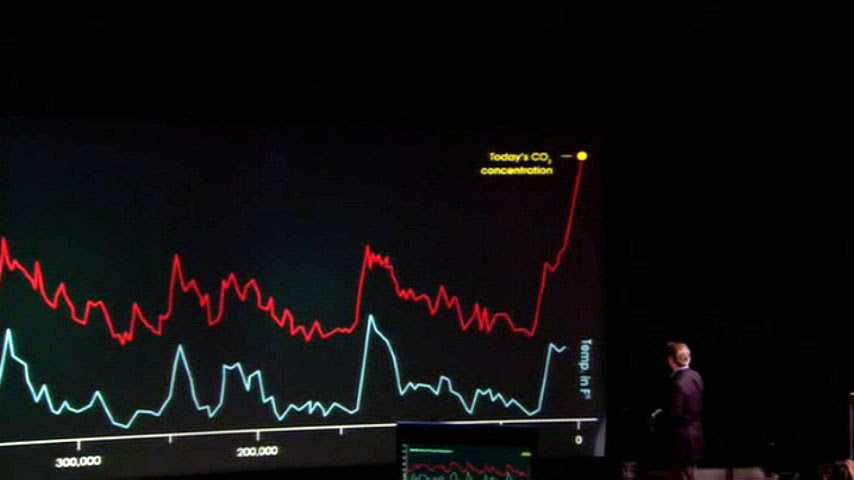 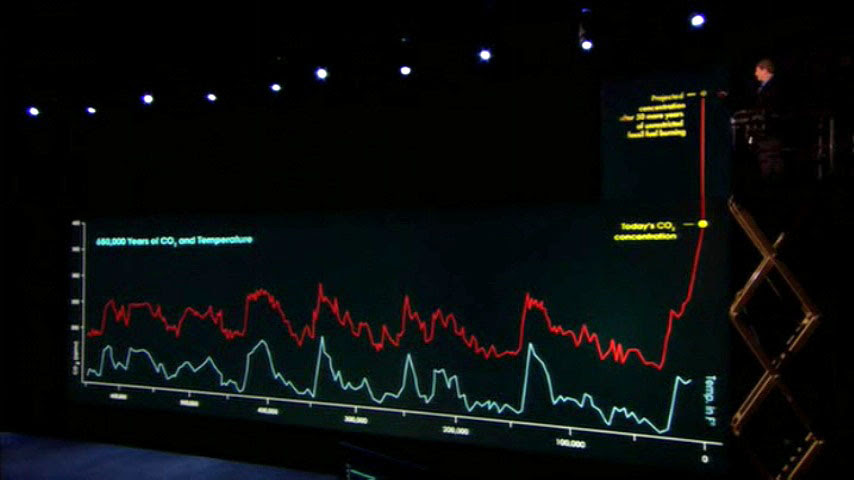 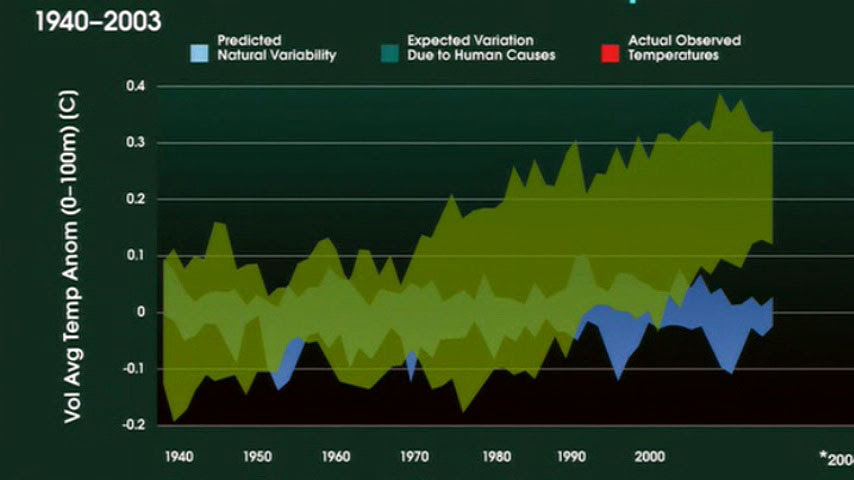 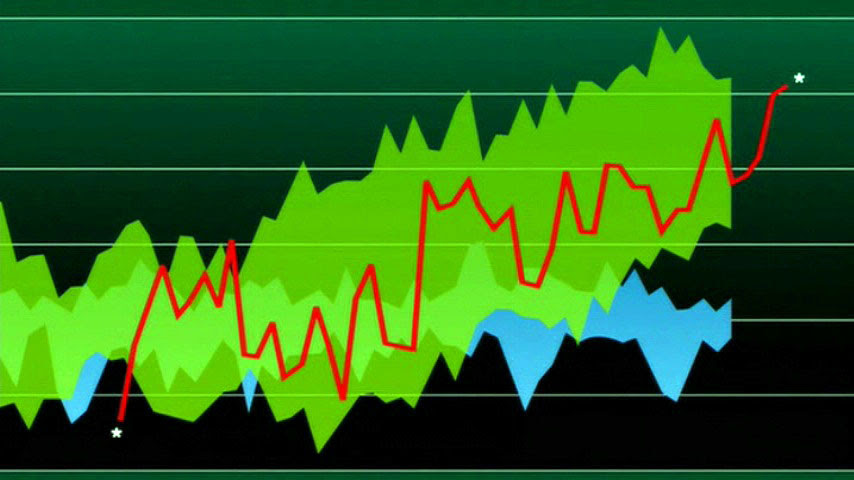 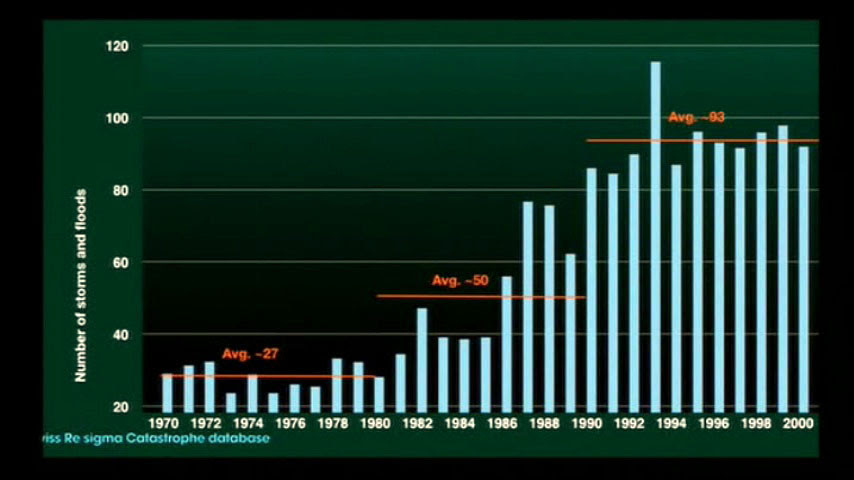 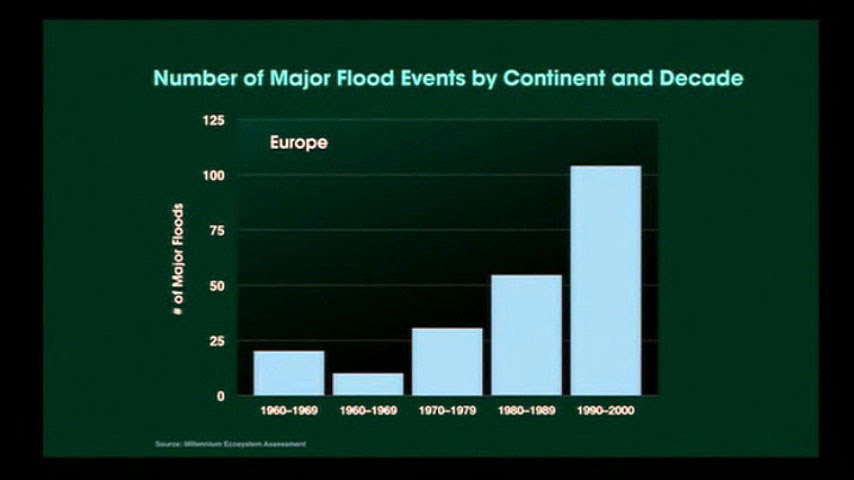 00:37:21
Incidents of major flooding have increased in recent decades. 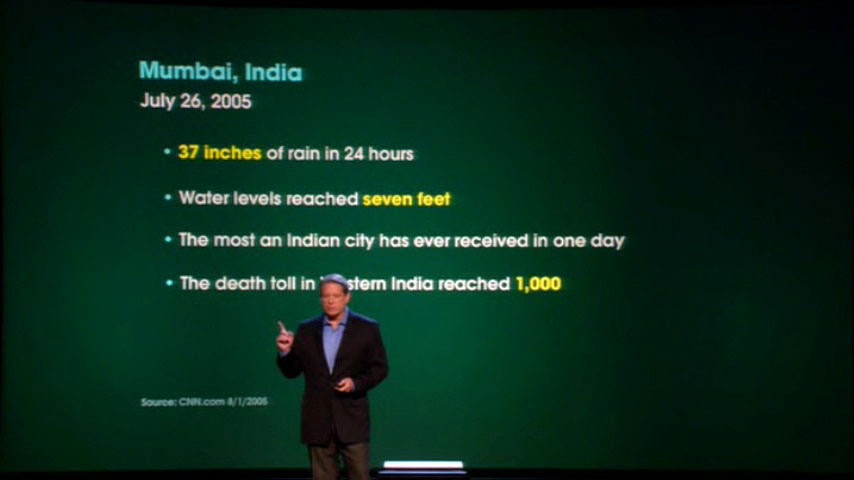 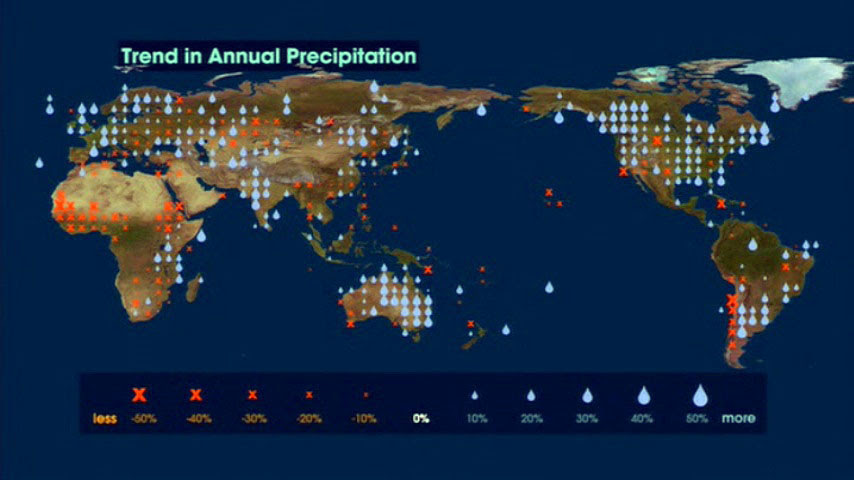 00:38:12
Global precipitation has increased in last century by 20% but not evenly; some areas have received less. Sub-Sahara Africa is severely affected. 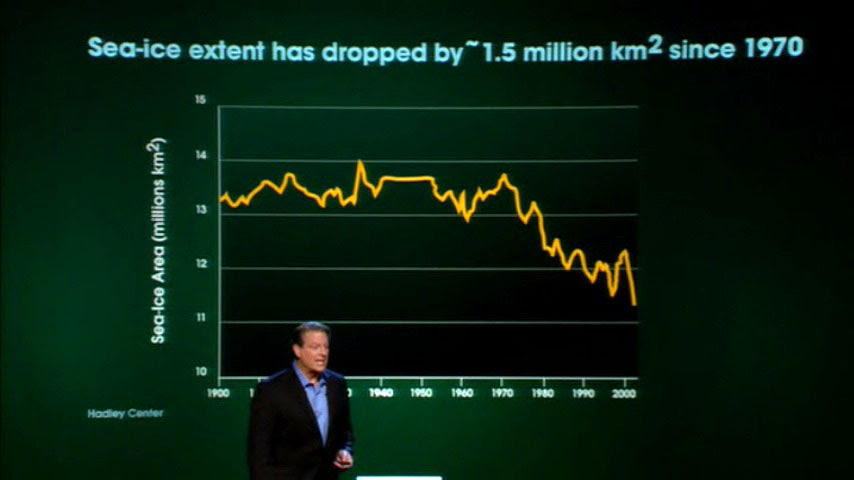 00:44:25
Arctic sea ice extent and thickness has diminished precipitously since the 1970's. 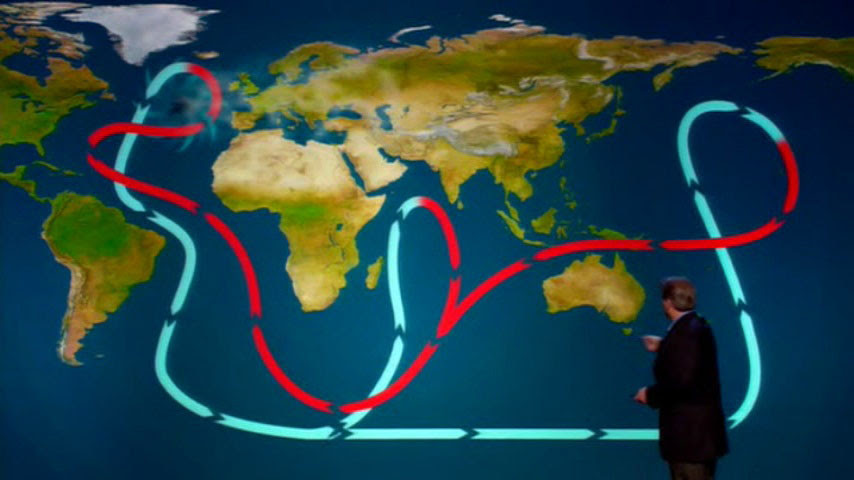 00:47:30
The 'Global Ocean Conveyor Belt' carries heat around the globe, in particular, to Europe. However, disruption due to ice melt has stopped heat flow to Europe in the past. 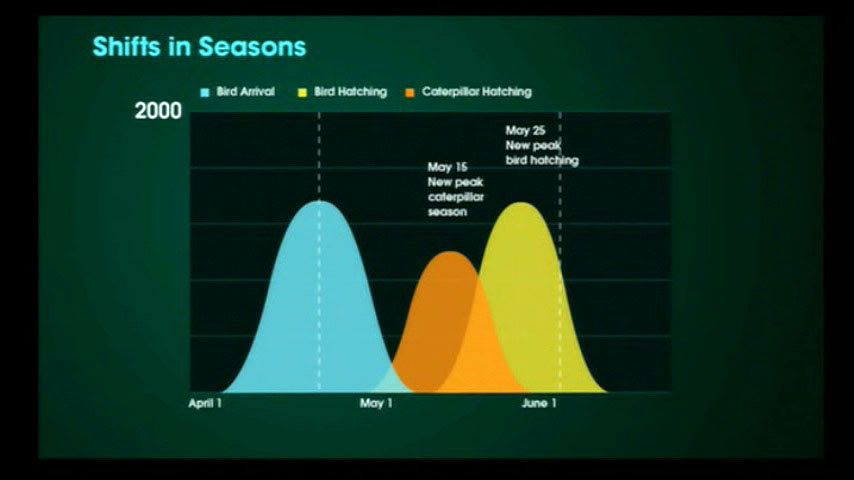 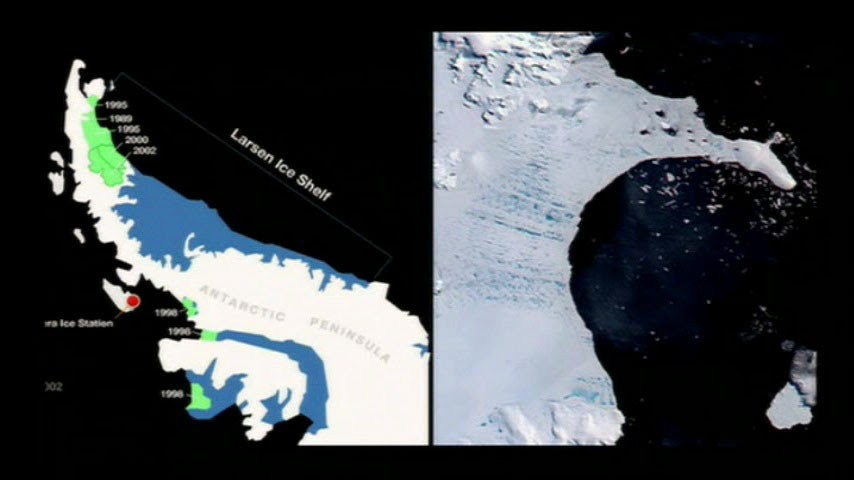 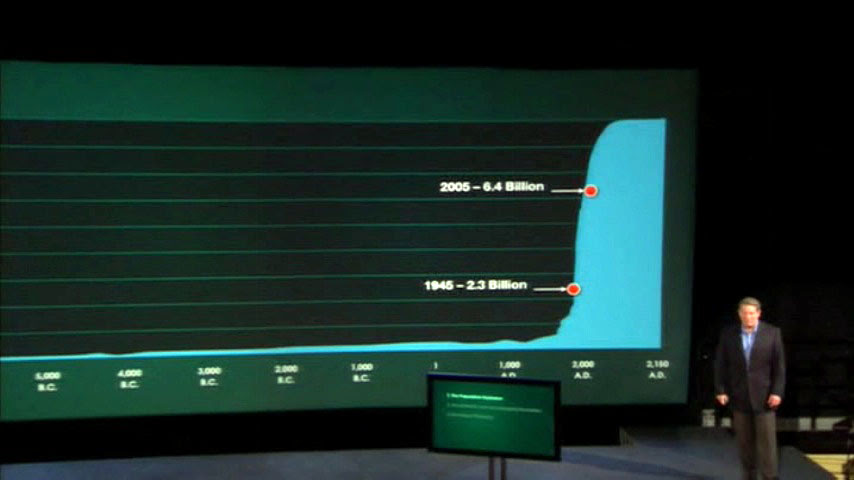 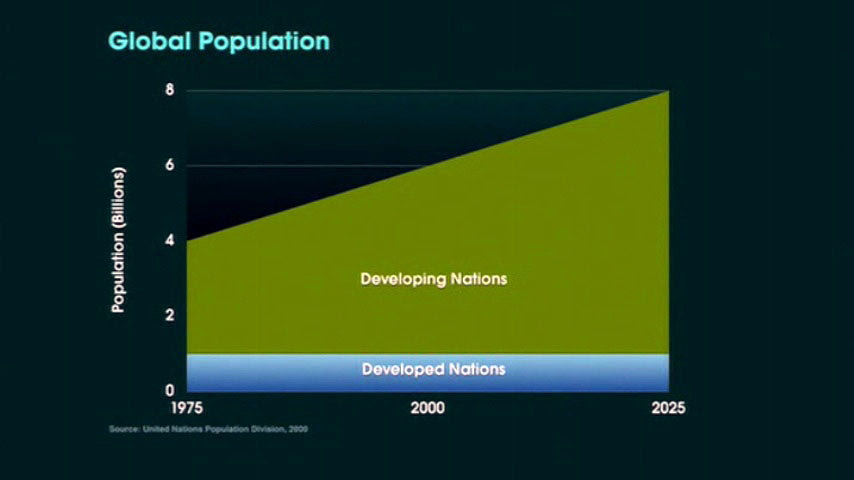 01:04:22
Much of the population growth is occurring in developing countries. 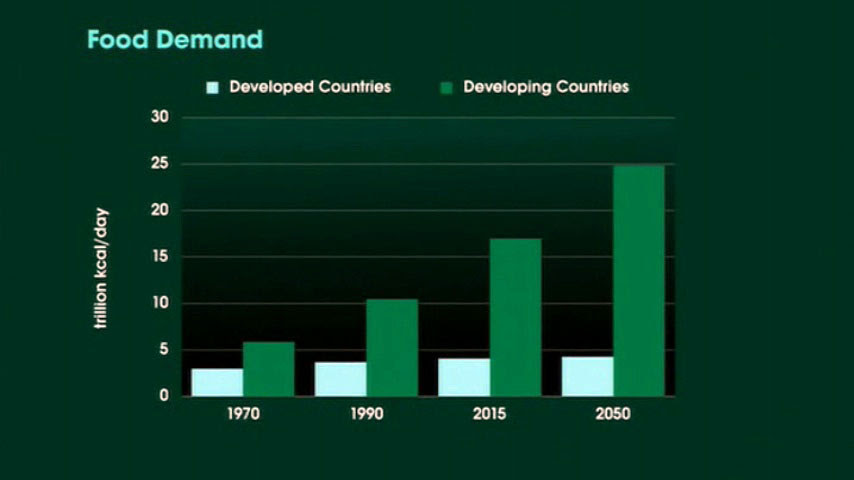 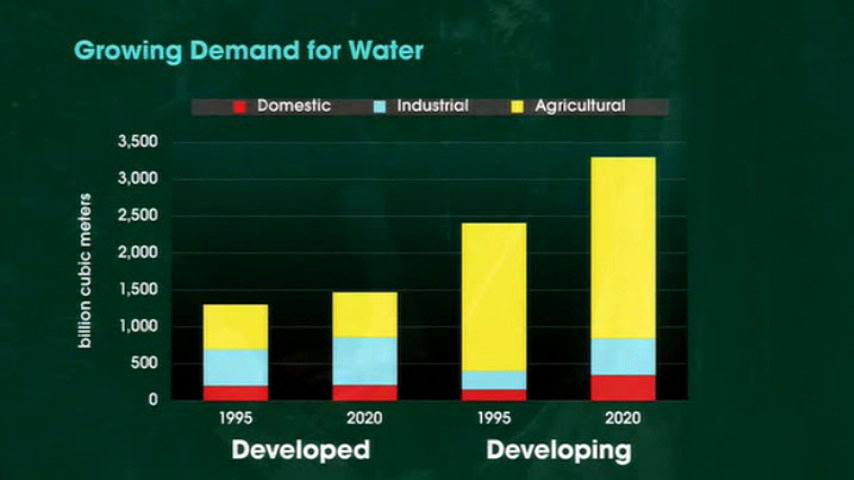 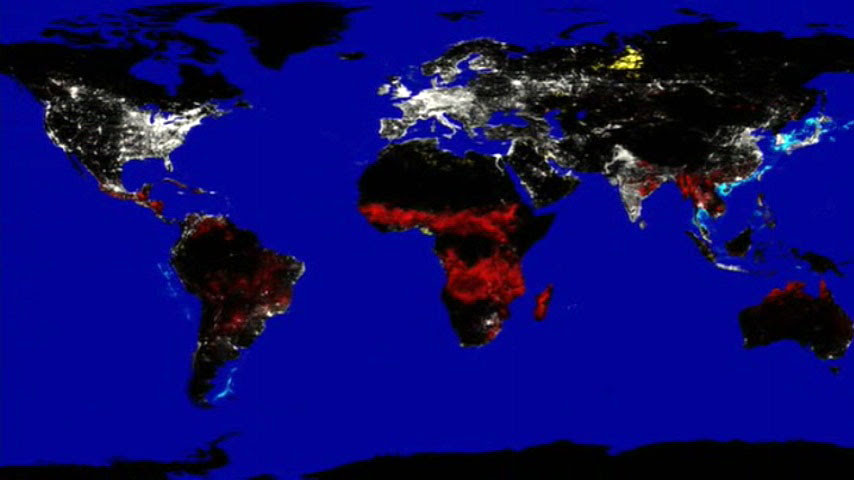 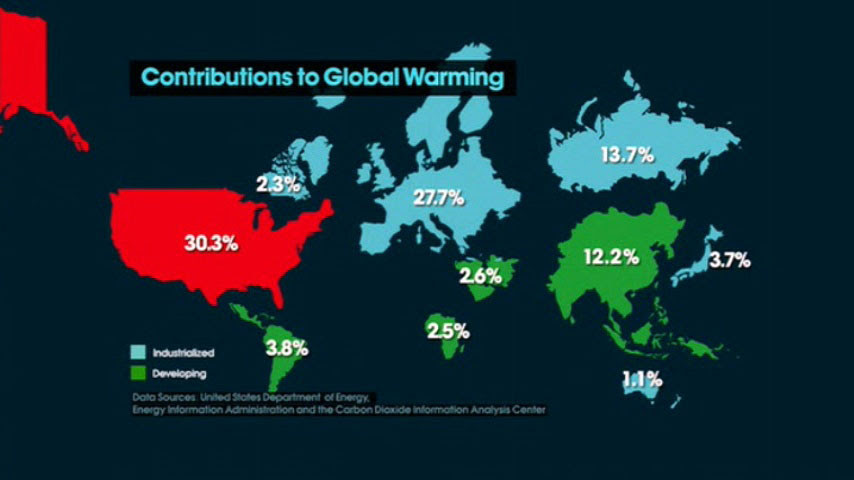 01:07:57
Relative contribution to global warming, by country. "USA is responsible for more greenhouse gas pollution than South America, Africa, the Middle East, Australia, Japan, and Asia -- all put together." 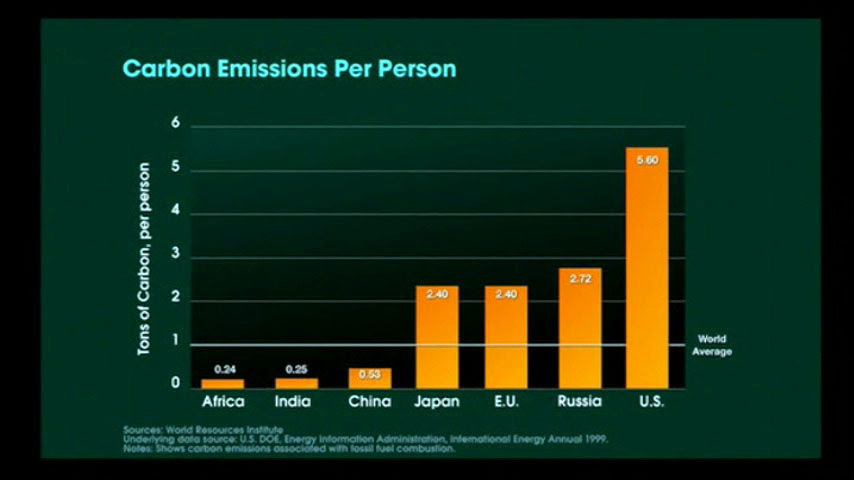 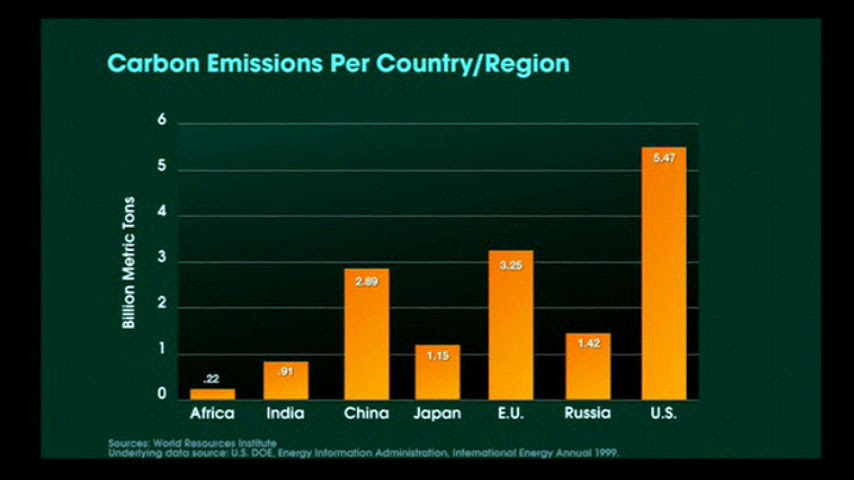 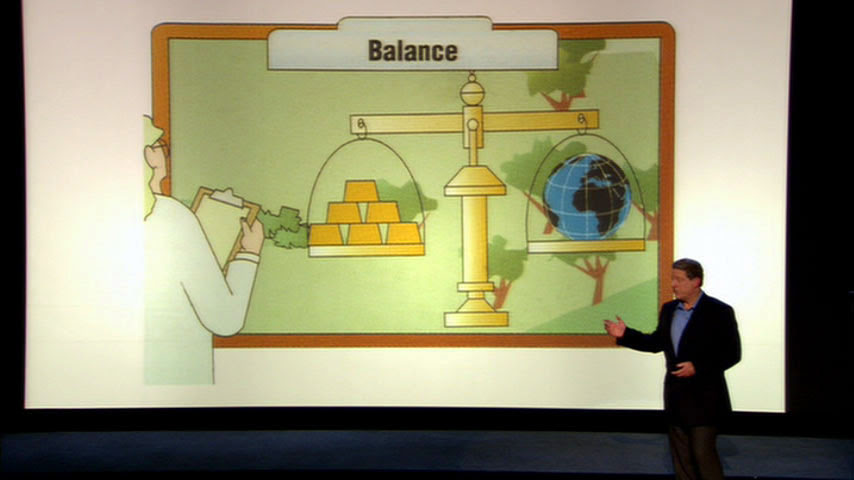 01:17:52
"We don't have to choose between a healthy economy and a healthy environment. Without a planet, we won't enjoy gold bars, and if we do the right things, we'll have both." 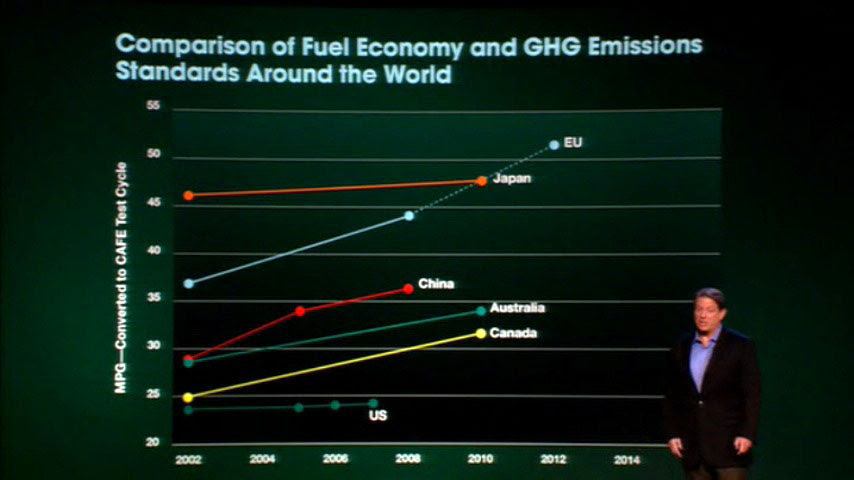 01:21:22
Comparison of vehicle fuel economy and emission standards around the world. 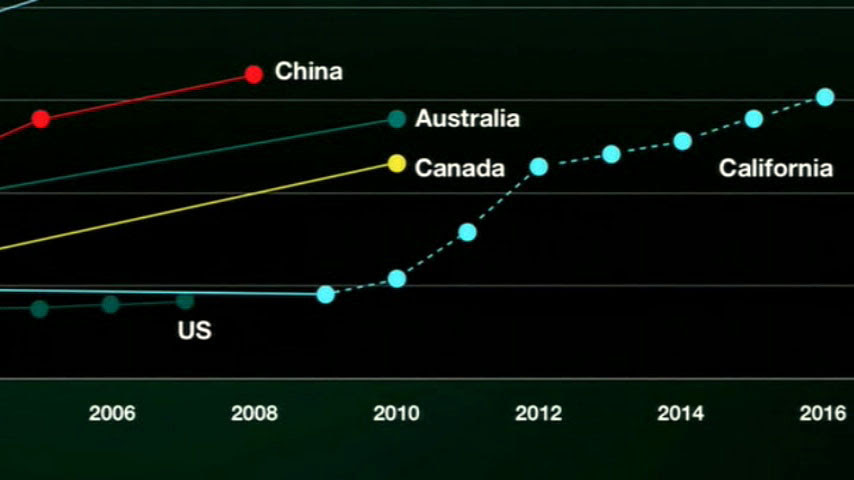 01:21:37
California proposes standards that exceed US national standards. US car manufacturers suing California, saying targets are unreachable in 10 years -- despite manufacturers in other countries already doing it now. 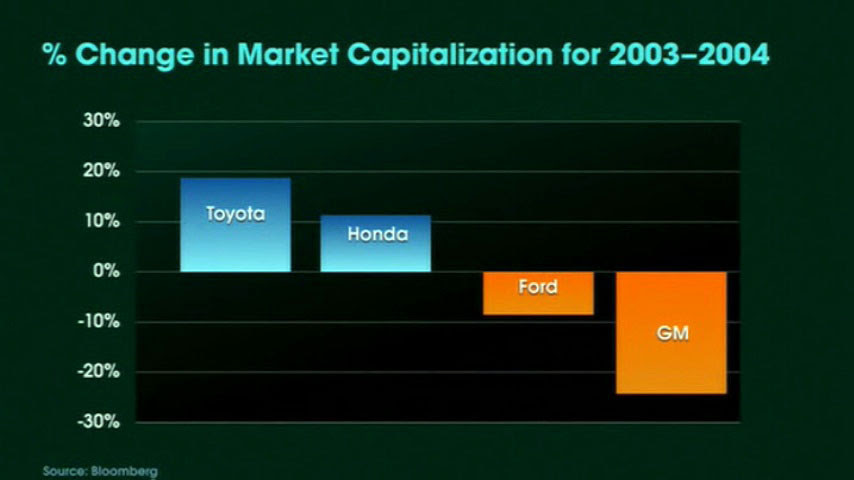 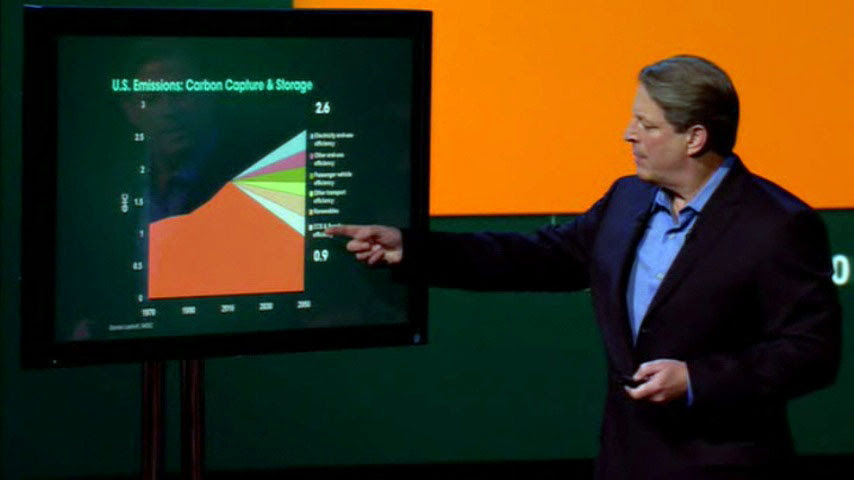 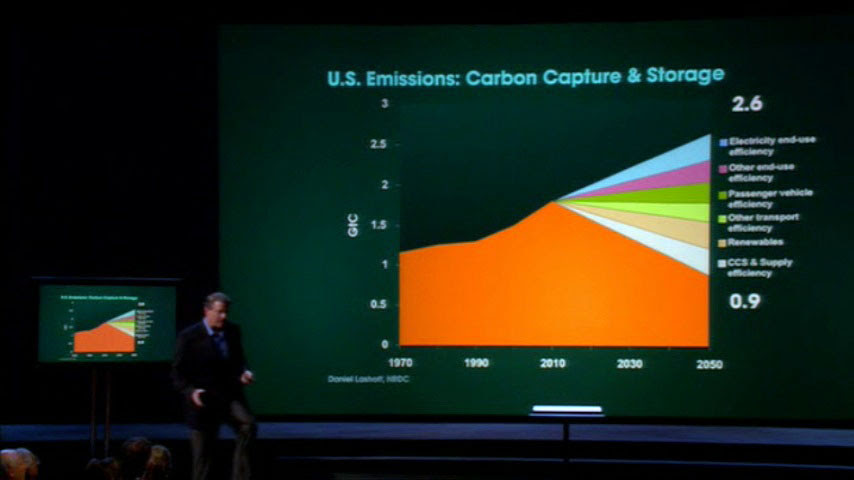 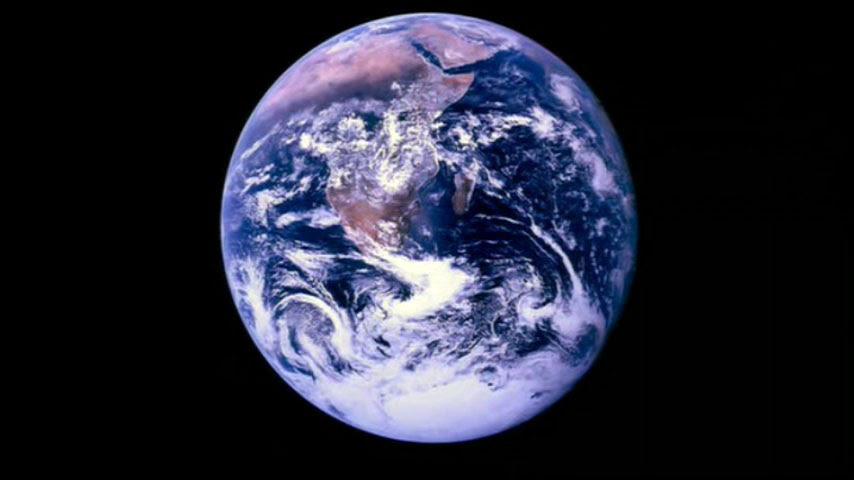 01:28:02
"Future generations may well have occasion to ask themselves, What were our parents thinking? Why didn't they wake up when they had the chance? We have to hear that question, from them, now."